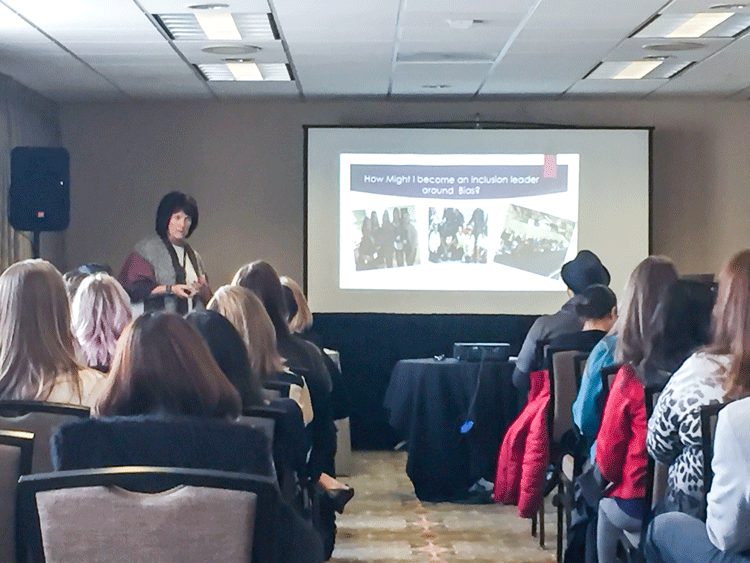 Sandy Bauler was watching a 30-second commercial showing two parents and their child, who is dressed in an astronaut suit and helmet, check in at the airport for a flight. The family goes through security and is then greeted by airline staff at the gate. As the three of them are about to board, the child removes the helmet and reveals a huge smile on a young girl’s face.

Bauler, a program specialist at the San Diego Workforce Partnership, shared that the whole time she was watching the video, she had assumed the little astronaut was a boy. She was surprised to realize she was experiencing implicit or unconscious bias; after all, a big part of her life’s work has been to create gender equity in stock car racing—one of Bauler’s many careers.

“You can be an advocate on a topic and still have a bias,” Bauler said.

In fact, unconscious bias happens to everyone. It happens when one’s background, personal experiences and cultural context have an impact on decisions and actions. Unconscious bias happens when we make snap judgments and assessments of people and situations without us realizing. Though sometimes quick decision-making can save time and energy, sometimes knee-jerk reactions lead to bad choices.

Why is recognizing and overcoming unconscious bias important?

Attendees came up with human-centered design questions they can ask themselves when working with co-workers or their customers to really listen and understand from a different place. “How do our biases impact how we provide service?” Harrell asked.

Questions we can ask include: “Why do I feel this away about this person?” “How do I see this person as an individual rather than as a stereotypical representation of a group?”

The facilitators talked about how to move through our past to be our personal best. Many attendees had no idea how often they say negative things or downplay their own achievement. How might this have affected their own perception of reality when it comes to other people?

In youth workforce development efforts, biases can negatively impact effective job placements. For example, if a case manager has opinions about parenting teens, that bias may affect how well the case manager will advocate on behalf of a client who is a teen mom or find a job placement for that client.

“These biases go back to infancy and most of us are unaware how they have impacted our decisions,” said Bauler.

Brady led an exercise in which he asked everyone to keep repeating after him and saying the word “folk.” He then abruptly inserted a question that has nothing to with the word, and yet several people in the audience responded with that word.

Our kneejerk reactions are sometimes difficult to overcome even if intellectually we know it may not be the best response.

Bauler led an exercise in which people thought about their “circles of love,” which consist of people they trust who are not family members. Most people shared they only had two or three individuals they trust with the most intimate information.

“The small number of individuals we truly trust tends to look like ourselves,” said Bauler. “How this translates to the workplace is, when we are completing a big project, we sometimes choose people we most identify with, and thereby not allowing others to learn and also shine.”

“The less exposed we are to people unlike us, the more we tend to surround ourselves with those similar to ourselves,” said Harrell.

Overcoming unconscious bias helps create more equitable ways of doing business, including how we work with clients and one other.

To this end, SDWP is expanding efforts to be more inclusive in our business practices and in how we work with our partners and colleagues through a workgroup that looks at equity, diversity and inclusion practices. In the works are facilitator-led interviews, surveys and workshops to help staff develop a concrete plan to overcome our own organizational and individual biases.