Chitin is a homopolymer of β(1,4)-linked N-acetyl-D-glucosamine residue . 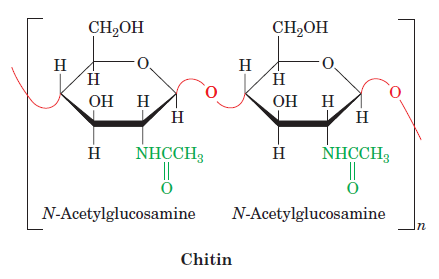 The structure of chitin, an extended ribbon, is identical to that of cellulose, except that the $\ce{-OH}$ group on each C-2 is replaced by $\ce{-NHCOCH3}$, so the repeating units are N-acetyl-D-glucosamines in β (1→4) linkage.

The acetyl group can contribute to the formation of hydrogen bonds that can stabilise the crystalline structure. The chains of chitin form extended ribbons and pack side by side in a crystalline, strongly hydrogen-bonded form. The acetyl groups contribute to the formation of stable H-bonds along the inter sheet direction, fracture along this direction requires more energy to break these high occupancy H-bonds (which prevent association with water molecules).

As a result of the hydrophobic property of acetyl group, chitin is ordinarily insoluble in water. This explains the insolubility properties of chitin.

When deacetylated, the solubility apparently increase due to increased hydrophilicity of the introduced amino groups (as well as the weakened crystalline structure allowing formation on H-bonds with water molecules).