Restaurants and taverns sell liquor by the drink for consumption on the premises. Liquor stores sell unopened bottles for consumption off-premises. The economic environments in which both establishments operate are markedly different, as is the pricing policy. State governments play a role, as they were granted significant regulatory authority over liquor sales within their borders by the 21st amendment to the US Constitution.

The Impact of Prohibition

The current retail marketplace for liquor is the result of Prohibition, which was repealed in 1933 when the 21st amendment to the Constitution was ratified. That amendment gave the states broad control over the manufacture, distribution and sale of alcoholic beverages within their borders. About a third of the states exercise that control by operating retail liquor monopolies – that is, in those states, the states own and operate all the liquor stores, and in some cases distribution as well. The other two thirds of the states follow a license system of control, tightly regulating all aspects of the industry within their borders by restricting the licenses issued.

In the states that operate monopolies in the retail liquor industry, the price of liquor sold in Alcoholic Beverage Commission or state stores is set by the state government and is uniform throughout the state. The markup varies from one state to the next, but ranges from around 25 percent to 45 percent. Some states also routinely hold sales on different products that may lower the markup.

States that issue licenses to liquor stores allow those stores to set their own prices, but prohibit stores from selling liquor for less than the wholesale price. Stores may not engage in the customary marketing practice of taking a loss on one product to encourage sales of other, more profitable items. These stores also mark up their liquor prices between 25 and 50 percent, but are more heavily influenced by local retail conditions; for example, the proximity of competing stores.

Restaurants and taverns typically mark up their liquors much more than liquor stores. Their goal is to realize a profit of 70 to 80 percent on liquor sales – that is, to sell a $20 bottle of liquor, drink by drink, for $66 to $100. In the industry, this is expressed as beverage cost or “pour cost” – that is, the cost of the liquor served. If the profit is 70 percent, the pour cost is 30 percent; if the profit is 80 percent, the pour cost is 20 percent, and so on. There are several ways to calculate the price per drink necessary to achieve the desired profit, but all are based on the number of shots in a bottle. The standard shot size is 1.5 ounces, but many establishments under- or over-pour, affecting the number of shots in the bottle and thus the markup. Other factors affecting liquor markup in taverns include free drinks and theft.

Dale Marshall began writing for Internet clients in 2009. He specializes in topics related to the areas in which he worked for more than three decades, including finance, insurance, labor relations and human resources. Marshall earned a Bachelor of Arts in communication from the University of Connecticut. 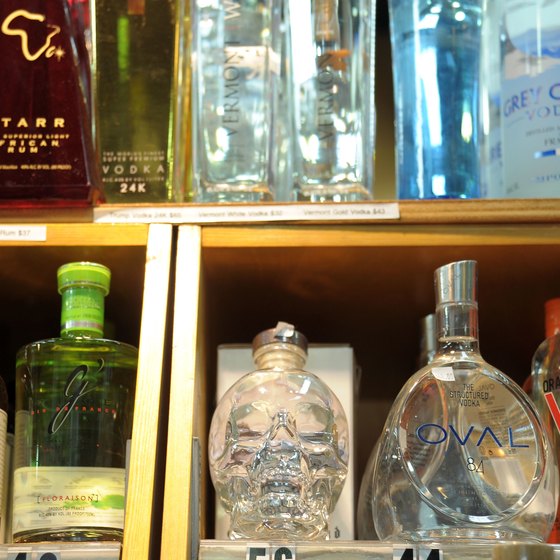