iOS developers have powerful tools to build apps. The most important one is Xcode, the main application of the software development kit that Apple has. Inside Xcode, there is a visual editor called “Interface Builder” that allow developers to create, configure and setup views in a user-friendly visual way (instead of just writing code).

In this post we are going to analyze the pros and cons of using this Interface Builder tool and which are the best practices used at Mobile Jazz when using it. Also, we are going to link to some third-party libraries that we use in order to speed up and improve our development efficiency, as well as our final product quality.

XIBs are XML files that define and configure a set of objects, and are designed specially to manipulate mostly views (subclasses of UIView). Xcode has a user-friendly editor that can display those views as it were a running app, making it extremely easy to configure and design the layout (saving lots of lines of code) .

Even if most developers associate an XIB file to a “screen” or a “view controller”, XIBs are generic containers of objects and can be used together with other object types as UIViews, NSObjects or just alone.

As a difference of a XIB, Storyboards are made to define UIViewController’s views and navigation between them.

Lets assume now that our readers have already a basic knowledge of what and how to use XIBs, storyboards and even do it by code.

In the following bullet-points we are going to list some benefits and inconveniences (that you may have probably discovered by yourself) of XIBs, storyboards and code:

Benefits of XIBs vs Code

Benefits of Storyboard vs XIBs

Inconveniences of XIBs vs Code

Inconveniences of Storyboards vs Code & XIBs

One of the most important problems we face at Mobile Jazz and that we need to resolve extremely well is how to create good app architectures, considering that projects needs to be usable, scalable and well organized. Making good usage of Storyboards and XIBs helps a lot in all these.

First of all, we need to think in terms of “how is the app to be developed”. Is it big? Does it contains lots of screens? or it is a small-medium app with a relative small group of screens? Depending on this, we may take one approach or another:

However, there are other points to consider. For example, the usage of independent XIBs to specify views (not view controllers) that are being used in multiple screens. A clear example of this is when prototyping UITableViewCell subclasses, as we have create a XIB for each cell class (this can also be done inside a Storyboard).

The same approach can be done in other views. However, it will be needed an specific “initializer” for the view from the XIB, as we cannot use the usual “-initWithFrame:”, as here we will need to instantiate the XIB (UINib) and retrieve the views and objects from it.

A good example on how this could be done is reproducing the same behavior that UIViewController has with the method “-initWithNibName:bundle:” in UIView in a category. This method would initialize a UIView from the instance created from a XIB.

Using this approach, we can now define and configure views (with its subviews) inside XIB files and create instances from them in a very easy and straightforward way. However, this approach has an issue: we cannot instantiate views that are defined in a XIB file from another XIB file. In Mobile Jazz we have faced this issue and proposed a solution: the NibWrapper. 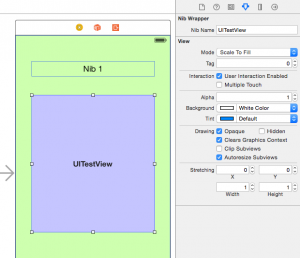 This solution is very useful to reuse some generic views in multiple view controllers.

However, if your have to create a custom view with a specific behaviour, you can always create it by manually laying out the subviews by overriding the method “-layoutSubviews”.

As mentioned before, one option is to divide your app in multiple modules and create several Storyboards. This allows your app to properly organize your code as well as establish some “entry points” to each module by considering the “initial view controller” of each storyboard the first screen to show on that module.

To help manage this, one good option is to create a category on UIStoryboard and return different initial view controllers.

Subclassing objects to be used in XIBs and Storyboards

When creating subclasses of UIView, it is important the think that that view can be instantiated in both programmatically and inside a XIB. Therefore, do not forget to make your subclass easy configurable via a XIB:

Also, it is important to prepare your UIViewController subclasses when using them together with XIB files:

In retrospective, we have described some approaches and practices we do at Mobile Jazz when creating and architecting an app for iOS. The key points are:

Also, remember to use the view debugger to show and debug in runtime your window layout in interface builder.