Apple (NASDAQ:AAPL) is one of the most followed and discussed names in the market. However, most analysts and media outlets focus their attention on the latest announcements from the company, such as the recently launched iPad Air 2 or the iPhone 6 and iPhone 6 Plus models.

While product innovation is clearly important, Apple investors might want to take the long-term view in order to make a deeper analysis about the company and its potential as an investment in the years ahead. Let´s look at Apple stock using financial ratio analysis and highlight a few important considerations for investors.

Think different when it comes to growth
Looking at annual sales growth over the last few years, Apple's sales growth has decelerated considerably in fiscal 2013, which is quite understandable as the smartphones and tablets markets move beyond their initial, explosive growth stages toward more moderate and sustainable growth levels.

Besides, the company's enormous success with its iPhone and iPad products has inevitably produced high levels of competition in those markets, mostly from players selling their devices at lower prices than Apple.

However, not everything is bad news for Apple investors when it comes to growth rates lately. The company has recently announced better than expected performance for the fourth quarter of fiscal 2014 on the back of a big increase of 16% in iPhone sales to over 39.27 million devices in the last quarter. In addition, sales guidance for the key holiday quarter was also above expectations, indicating that demand is being quite strong the recently launched iPhone 6 and iPhone 6 Plus models. The iPhone is big contributor for Apple when it comes to both sales and profits, so strong reception from customers is a big positive for investors Apple stock.

Thanks to growing iPhone sales, solid profit margins, and a reduced share count, Apple delivered a 20% increase in earnings per share during the last quarter. This is impressive growth for a company of its size, and also a big acceleration in annual growth rates over the last quarters.

Future sales growth will depend on multiple factors that are hard to predict, such as demand for the company's new products and the competitive landscape. One thing looks clear, though: share buybacks will most likely continue having a material positive impact on EPS growth.

Premium profitability
There are basically two kinds of profitability ratios. Profit margins such as operating margin and net margin measure earnings as a percentage of sales, indicating how efficient the company is at generating profits for each dollar of revenue. Other ratios such as return on assets and return on equity measure profitability over capital; these ratios tell us how good management is at producing profits for every dollar in assets or equity.

When comparing these different profitability ratios for Apple versus main competitor Samsung(NASDAQOTH: SSNLF), Apple is unmistakably the winner across the board.

This is clearly due to the company's brand differentiation and pricing power, which has a big impact on profitability levels. In fact, based on the Forbes brand ranking, which takes profitability as a major consideration in evaluating brands, Apple is the most valuable brand in the world.

Attractive valuation
Valuation levels have rebounded somewhat over the last year as investors applaud the company's improved financial performance and dynamic capital distribution policies, which include both big stock buybacks and growing dividends. However, Apple stock is still quite attractively valued when looking historically at different valuation ratios. 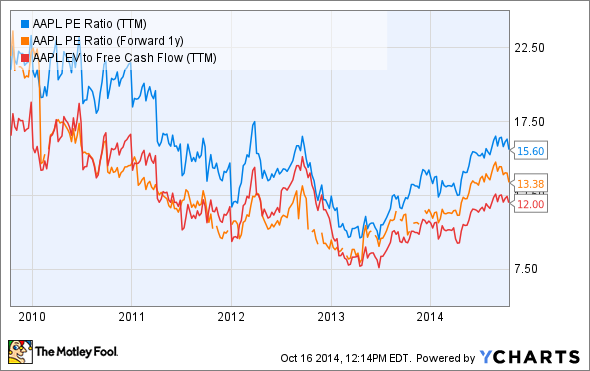 To some degree, this relatively lower valuation could reflect the deceleration in sales growth in recent years. However, Apple is trading at a discount to the market in general: The company trades at a forward P/E of roughly 13.5 versus a ratio of nearly 17 for the average company in the S&P 500, as calculated by Morningstar.

Considering that Apple is an above-average company due to its competitive differentiation, superior profitability, and unquestionable financial soundness, current valuation levels look like a convenient entry point for long-term investors in this stock.

The Foolish final word
Growth rates have slowed over the last years, and sales are always hard to predict for a company operating in such a dynamic and competitive environment. However, large share buybacks bode well for EPS growth over the years ahead. Apple´s profitability is remarkably high in comparison to Samsung, and valuation is quite attractive, both from a historical perspective and in comparison to companies in the S&P 500 index. All in all, financial ratios paint a promising picture for Apple investors.