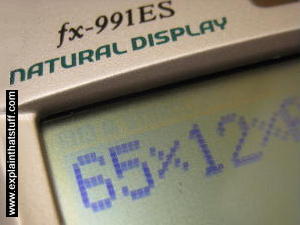 Televisions used to be hot, heavy, power-hungry beasts that sat in the corner of your living room. Not any more! Now they're slim enough to hang on the wall and they use a fraction as much energy as they used to. Like laptop computers, most new televisions have flat screens with LCDs (liquid-crystal displays)—the same technology we've been using for years in things like calculators, cellphones, and digital watches. What are they and how do they work? Let's take a closer look!

Photo: Small LCDs like this one have been widely used in calculators and digital watches since the 1970s, but they were relatively expensive in those days and produced only black-and-white (actually, dark-blueish and white) images. During the 1980s and 1990s, manufacturers figured out how to make larger color screens at relatively affordable prices. That was when the market for LCD TVs and color laptop computers really took off.

How does a television screen make its picture? 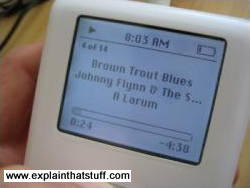 Photo: This iPod screen is another example of LCD technology. Its pixels are colored black and they're either on or off, so the display is black-and-white. In an LCD TV screen, much smaller pixels colored red, blue, or green make a brightly colored moving picture.

For many people, the most attractive thing about LCD TVs is not the way they make a picture but their flat, compact screen. Unlike an old-style TV, an LCD screen is flat enough to hang on your wall. That's because it generates its picture in an entirely different way.

You probably know that an old-style cathode-ray tube (CRT) television makes a picture using three electron guns. Think of them as three very fast, very precise paintbrushes that dance back and forth, painting a moving image on the back of the screen that you can watch when you sit in front of it.

Flatscreen LCD and plasma screens work in a completely different way. If you sit up close to a flatscreen TV, you'll notice that the picture is made from millions of tiny blocks called pixels (picture elements). Each one of these is effectively a separate red, blue, or green light that can be switched on or off very rapidly to make the moving color picture. The pixels are controlled in completely different ways in plasma and LCD screens. In a plasma screen, each pixel is a tiny fluorescent lamp switched on or off electronically. In an LCD television, the pixels are switched on or off electronically using liquid crystals to rotate polarized light. That's not as complex as it sounds! To understand what's going on, first we need to understand what liquid crystals are; then we need to look more closely at light and how it travels.

What are liquid crystals? 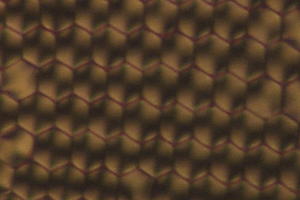 Photo: Liquid crystals dried and viewed through polarized light. You can see they have a much more regular structure than an ordinary liquid. Photo from research by David Weitz courtesy of NASA Marshall Space Flight Center (NASA-MSFC).

We're used to the idea that a given substance can be in one of three states: solid, liquid, or gas—we call them states of matter—and up until the late 19th century, scientists thought that was the end of the story. Then, in 1888, an Austrian chemist named Friedrich Reinitzer (1857–1927) discovered liquid crystals, which are another state entirely, somewhere in between liquids and solids. Liquid crystals might have lingered in obscurity but for the fact that they turned out to have some very useful properties.

Solids are frozen lumps of matter that stay put all by themselves, often with their atoms packed in a neat, regular arrangement called a crystal (or crystalline lattice). Liquids lack the order of solids and, though they stay put if you keep them in a container, they flow relatively easily when you pour them out. Now imagine a substance with some of the order of a solid and some of the fluidity of a liquid. What you have is a liquid crystal—a kind of halfway house in between. At any given moment, liquid crystals can be in one of several possible "substates" (phases) somewhere in a limbo-land between solid and liquid. The two most important liquid crystal phases are called nematic and smectic: 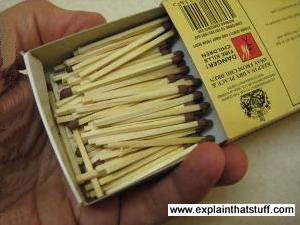 Want to know more about liquid crystals? There's a great page called History and Properties of Liquid Crystals on the Nobel website.

What is polarized light?

Nematic liquid crystals have a really neat party trick. They can adopt a twisted-up structure and, when you apply electricity to them, they straighten out again. That may not sound much of a trick, but it's the key to how LCD displays turn pixels on and off. To understand how liquid crystals can control pixels, we need to know about polarized light.

Light is a mysterious thing. Sometimes it behaves like a stream of particles—like a constant barrage of microscopic cannonballs carrying energy we can see, through the air, at extremely high speed. Other times, light behaves more like waves on the sea. Instead of water moving up and down, light is a wave pattern of electrical and magnetic energy vibrating through space.

Photo: A trick of the polarized light: rotate one pair of polarizing sunglasses past another and you can block out virtually all the light that normally passes through. 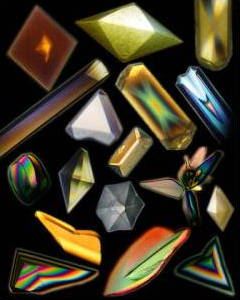 Photo: A less well known trick of polarized light: it makes crystals gleam with amazing spectral colors due to a phenomenon called pleochroism. Photo of protein and virus crystals, many of which were grown in space. Credit: Dr. Alex McPherson, University of California, Irvine. Photo courtesy of NASA Marshall Space Flight Center (NASA-MSFC).

When sunlight streams down from the sky, the light waves are all mixed up and vibrating in every possible direction. But if we put a filter in the way, with a grid of lines arranged vertically like the openings in prison bars (only much closer together), we can block out all the light waves except the ones vibrating vertically (the only light waves that can get through vertical bars). Since we block off much of the original sunlight, our filter effectively dims the light. This is how polarizing sunglasses work: they cut out all but the sunlight vibrating in one direction or plane. Light filtered in this way is called polarized or plane-polarized light (because it can travel in only one plane).

If you have two pairs of polarizing sunglasses (and it won't work with ordinary sunglasses), you can do a clever trick. If you put one pair directly in front of the other, you should still be able to see through. But if you slowly rotate one pair, and keep the other pair in the same place, you will see the light coming through gradually getting darker. When the two pairs of sunglasses are at 90 degrees to each other, you won't be able to see through them at all. The first pair of sunglasses blocks off all the light waves except ones vibrating vertically. The second pair of sunglasses works in exactly the same way as the first pair. If both pairs of glasses are pointing in the same direction, that's fine—light waves vibrating vertically can still get through both. But if we turn the second pair of glasses through 90 degrees, the light waves that made it through the first pair of glasses can no longer make it through the second pair. No light at all can get through two polarizing filters that are at 90 degrees to one another.

How LCD televisions use liquid crystals and polarized light 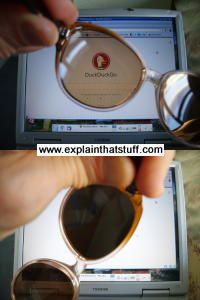 Photo: Prove to yourself that an LCD display uses polarized light. Simply put on a pair of polarizing sunglasses and rotate your head (or the display). You'll see the display at its brightest at one angle and at its darkest at exactly 90 degrees to that angle. 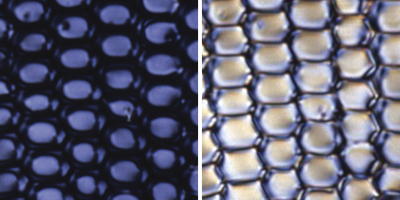 Photo: How liquid crystals switch light on and off. In one orientation, polarized light cannot pass through the crystals so they appear dark (left side photo). In a different orientation, polarized light passes through okay so the crystals appear bright (right side photo). We can make the crystals change orientation—and switch their pixels on and off—simply by applying an electric field. Photo from liquid crystal research by David Weitz courtesy of NASA Marshall Space Flight Center (NASA-MSFC).

An LCD TV screen uses the sunglasses trick to switch its colored pixels on or off. At the back of the screen, there's a large bright light that shines out toward the viewer. In front of this, there are the millions of pixels, each one made up of smaller areas called sub-pixels that are colored red, blue, or green. Each pixel has a polarizing glass filter behind it and another one in front of it at 90 degrees. That means the pixel normally looks dark. In between the two polarizing filters there's a tiny twisted, nematic liquid crystal that can be switched on or off (twisted or untwisted) electronically. When it's switched off, it rotates the light passing through it through 90 degrees, effectively allowing light to flow through the two polarizing filters and making the pixel look bright. When it's switched on, it doesn't rotate the light, which is blocked by one of the polarizers, and the pixel looks dark. Each pixel is controlled by a separate transistor (a tiny electronic component) that can switch it on or off many times each second.

There's a bright light at the back of your TV; there are lots of colored squares flickering on and off at the front. What goes on in between? Here's how each colored pixel is switched on or off:

How pixels are switched off

How pixels are switched on

What's the difference between LCD and plasma?

A plasma screen looks similar to an LCD, but works in a completely different way: each pixel is effectively a microscopic fluorescent lamp glowing with plasma. A plasma is a very hot form of gas in which the atoms have blown apart to make negatively charged electrons and positively charged ions (atoms minus their electrons). These move about freely, producing a fuzzy glow of light whenever they collide. Plasma screens can be made much bigger than ordinary cathode-ray tube televisions, but they are also much more expensive.

A brief history of LCDs

Press CTRL + D to bookmark this page for later or tell your friends about it with: