Investors may be surprised to learn that there's more than the obvious food connection between McDonald's Corporation(NYSE:MCD) and Chipotle Mexican Grill, Inc.(NYSE:CMG). Back in 1998, the burger purveyor was an early investor in the burrito chain and helped the company grow from its original 14 locations to more than 500 by 2006. At that time, McDonald's owned a 90% stake in Chipotle, before deciding to spin it off for a mere $1.5 billion.

Fast-forward to today, and even with its recent troubles, Chipotle sports a market cap exceeding $13 billion, making it a costly lesson for Mickey D's.

The more pressing question, though, is focused on the present. Which company makes for a better investment today? 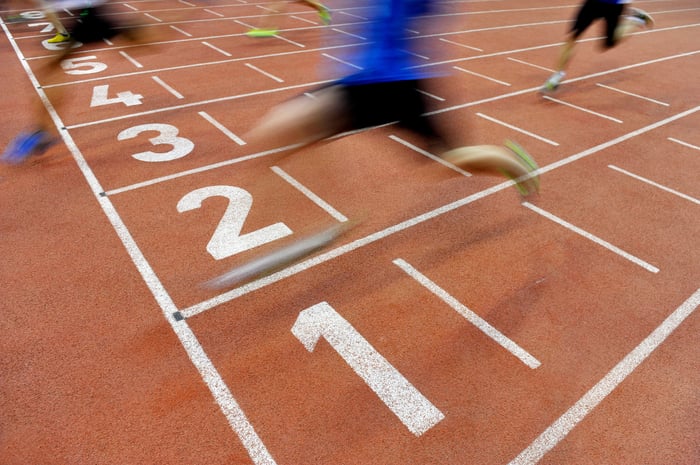 The Golden Arches or the Silver Burrito -- which is a tastier investment? Image source: Getty Images.

McDonald's has struggled in recent years, as more health-conscious consumers have been driving past the Golden Arches to healthier fare. Its turnaround efforts included highlighting healthier options, putting more emphasis on its coffee, and giving a nod to its core customers with its all-day breakfast initiative. The company has also simplified its menu, closed poorly performing locations, and focused on customer satisfaction to jump-start flagging sales.

Chipotle, meanwhile, has been reeling. Its stock price fell nearly 50% from its 2015 highs as the result of several high-profile foodborne-illness outbreaks that kept consumers away. Approximately 60 customers contracted E. coli in two separate incidents near the end of 2015, and shortly thereafter 140 customers in Boston fell ill with norovirus. The company has revamped its food-preparation techniques to improve food safety.

Though McDonald's was already adequately leveraged, it became much more so in 2015, as it took on debt to return an additional $10 billion to shareholders in 2016. Obviously, this type of move isn't sustainable, but the company has significant cash flow to cover the additional debt and day-to-day operations. By the same token, Chipotle has zero debt and sufficient cash to fund its turnaround efforts. Having no debt gives Chipotle greater flexibility.

McDonald's pays a dividend that yields about 2.4%, while Chipotle doesn't pay a dividend. Neither company bought back any shares in the past year, though over the past three years, Chipotle's share count has fallen by 6%, while McDonald's has fallen more than twice as much -- 13%.

Shares of McDonald's reflect that the company is further along in its turnaround, with its share price up 25% over the past year, compared with an 8% gain for Chipotle. 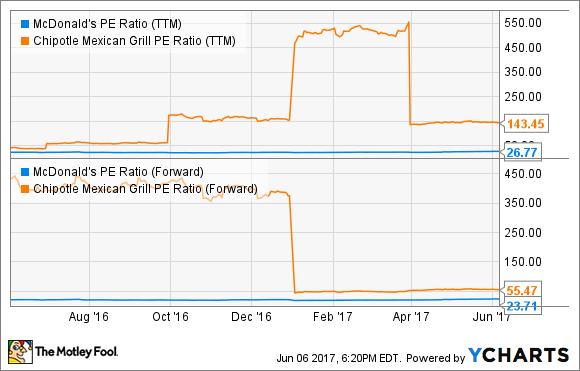 As a result of the fall-off in Chipotle's earnings, on a price-to-earnings basis, Chipotle looks ridiculously expensive, trading at roughly 130 times trailing earnings, while McDonald's has a significantly lower multiple of 27. But Chipotle was never an inexpensive stock, and looking forward provides a little more perspective. The multiple of 24 times forward earnings at McDonald's is cheaper than Chipotle's 55. McDonald's stock has performed better, yet Chipotle still commands a premium valuation, as investors are expecting the burrito purveyor to return to its former glory and high-flying ways. Any failure to deliver on investors' expectations, and Chipotle could plummet.

McDonald's has won this face-off by a landslide, so if investors are looking for a stable stock with a decent dividend, then McDonald's may be the best place for new money now. Don't count Chipotle out, though. The company is beginning to show signs of life, and investors with a higher risk threshold might want to consider Chipotle, as it appears its turnaround is beginning to take hold.