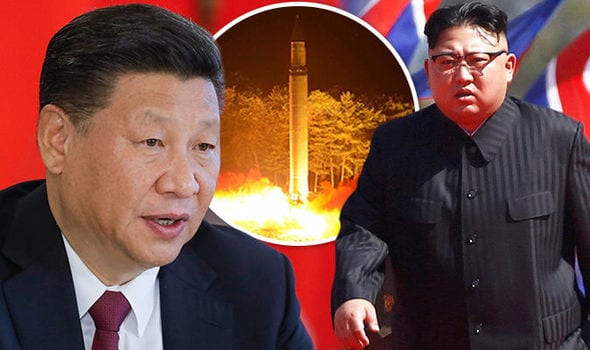 December 6, 2012. Beijing. Warning, this is a two-pronged article. One newsworthy aspect is the fact that US Naval Secretary Ray Mabus was in Beijing last week meeting with his counterparts in the Communist Chinese Military. The other interesting and related item is that the famed future seer Nostradamus gave us the name of the 3rd and final anti-Christ, and his name is Mabus. With reported discussions touching on the two nations jointly ruling the world, Nostradamus’ quatrain comes to mind. 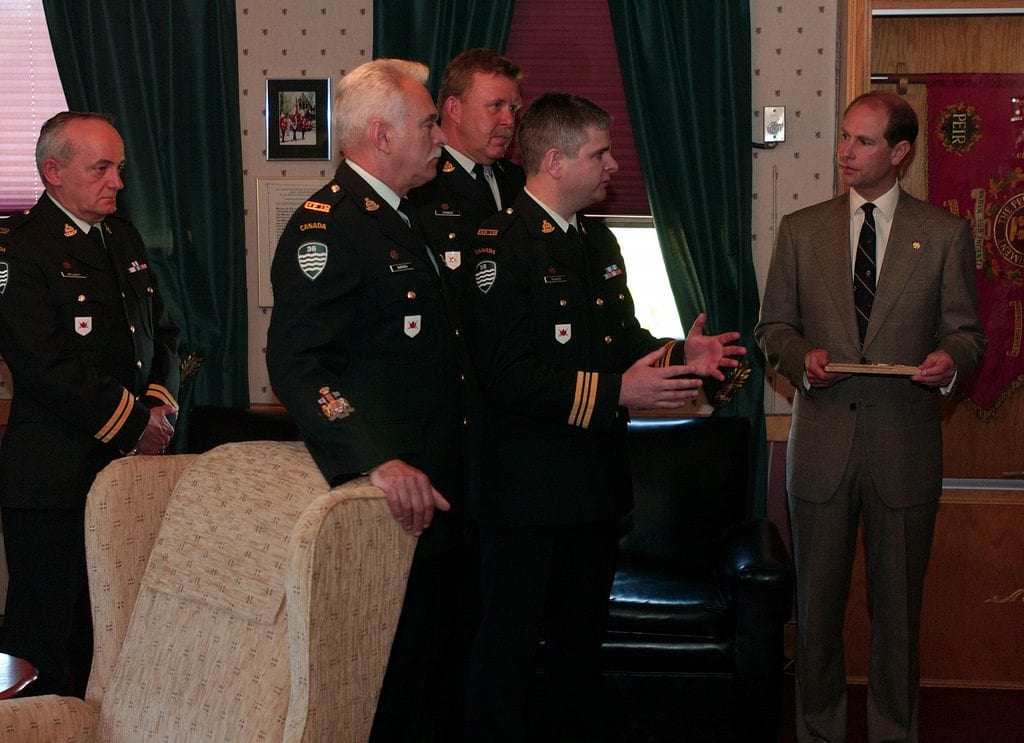 The timing of last week’s US-Chinese military meeting, the subject matter, current world events and the individuals involved, all leave readers with more questions than answers after this event in Beijing, China. And that’s before we even bring Nostradamus into the subject.

China fully admits that it is in the middle of the largest military upgrade and build-up in the nation’s history. The country reports that it currently spends $100 billion per year on its military. Second only to the US in arms spending, China is commonly accused of secretly producing and spending even more than it reports. Some suggest China’s true military budget could be as high as $200 or $300 billion.

Even still, that pales in comparison to America’s $700 billion per year in defense spending. That’s seven-times the second place nation, China, and more than all the nations of the world combined. And still, many American politicians insist the US military is too small and needs to be enlarged even more.

China began its push to catch the US in military capabilities as far back as the early 1990’s. It was then that the Communist Chinese military purchased secret, and yet undeveloped, missile technology from US military contractors over a veto by the Department of Defense. President Clinton simply transferred authority from the DoD to the Dept. of Commerce, where his good friend and Commerce Secretary Ron Brown happily approved the sale, shortly before his death in a mysterious plane crash.

Twenty-five years late, China became the first country in the world to successfully use weapons in outer space, shooting down a satellite orbiting the Earth. The US followed-up with a similar exercise only days later. For more information, read the Whiteout Press report, ‘How China conquered America’.

The Chinese military hasn’t slowed down its military build-up since then either. Just this year alone, the country has test-flown its first generation of stealth fighter jets, unveiled a new attack-helicopter, and launched its first aircraft carrier, surprising observers by taking off and landing aircraft on it almost immediately.

US and China ruling the world

The scant media reports detailing the US-China meeting of military commanders last week makes it difficult to discern what, if anything, came about because of the meeting. Taking a step back, it’s even difficult to understand what the purpose of the meeting was – other than to be shocked by China’s confident insistence that the two nations will jointly rule the world soon.

As described by accounts from Reuters, China just ushered in a new generation of Communist Party Leaders this month. And while the previous position of the Chinese military was to slowly build up and expand in its control locally and regionally, the new party leaders appear to be boisterously informing America that China will rule one half of the world while the US can rule the other.

“The Chinese military must develop, but there’s no worry or fear as the outside world says,” Chinese Defense Minister Liang Guanglie told US Naval Secretary Ray Mabus during the meeting, “That’s not what China is about.” Guanglie also discussed China’s recent land grabs in the South and East China Seas and what he called President Obama’s “pivot” to Asia. He insisted the US should ‘not get involved’.

Continuing to portray the Chinese and US as partners in the Communist nation’s military expansion, Guanglie insisted, “We should develop ties between us, between our two militaries, touch on some of our differences, resolve conflicting views.” The Chinese Defense Minister went on to suggest the two superpowers grow together into the coming realignment of global military powers. “We should push forward the development of our two powers and push forward the development of a new China-US military relationship,” he continued, “Our two countries are very important.”

China has recently found itself at diplomatic and military odds with most of its neighbors over its recent occupation of two islands and its military and geographic expansion, claiming almost the entire South and East China Seas. Countries nearing confrontation with China include the Philippines, Vietnam, Malaysia, Japan, Brunei and Taiwan.

Nostradamus and the 3 Anti-Christs

For those who consider themselves students or fans of Nostradamus, the name Mabus sends an eerie cringe down their spine. The 16th century psychic, as many know, left behind volumes of prophetic visions encrypted in 4-line poetic verse, written in rotating languages including astronomy. While alive, he proved his psychic abilities repeatedly until he was thrust onto the level of the monarchy of France and the Papacy of the Church. Alive during the time of the Bubonic Plague, Nostradamus was one of the few successful doctors who could not only handle highly contagious victims daily without being infected himself, but save many of their lives with his methods.

Forgotten as one of the greatest medical doctors in history, Nostradamus has become one of mankind’s most famous individuals for two main reasons – Anti-Christ #1 and Anti-Christ #2. Michel de Nostredame accurately predicted two of the most murderous and evil men who ever lived. Writing about them 300 and 400 years before they were born, Nostradamus named the two men by name, sort of.

He called the first Anti-Christ ‘Pau Nay Loron’. Nostradamus includes countless quatrains describing everything about the man – where he was born, where he would be imprisoned, what nations he would conquer, what nation would defeat him, his exile to a distant island, his escape from his island prison, his return to power, his return to war and his final defeat. Only one man in human history matches the dates, locations and details – Napoleon.

Nostradamus called the second Anti-Christ ‘Hister’ – a little easier to match-up with a murderous historical figure. Again, the 16th century psychic wrote dozens of quatrains detailing all the same information as with the first Anti-Christ, including such graphic descriptions as the ‘crooked cross’. Again, there is no doubt who Nostradamus was warning the future about – Adolf Hitler.

The 3rd and final Anti-Christ – Mabus

Unfortunately, unlike the first and second Anti-Christs, Nostradamus doesn’t give much detail or description about the third Anti-Christ. Some experts believe he didn’t name him Mabus either.

According to Nostradamus expert John Hogue, and detailed in his book, ‘Nostradamus and the Anti-Christ, Code Named MABUS’, “Nostradamus, the greatest prophet of the last 500 years not only knows who the Antichrist is but also who ‘they’ are. It was such a dangerous secret that he hid their true names in a code.”

Hogue’s writings go on to describe the third and yet unrevealed Anti-Christ saying, ‘This man is described as The king of terror…Nostradamus gave this Third Antichrist the following code name. He’s ‘Mabus’. A number of notorious contemporary figures, still living or recently dead from the Middle East can see their names spelled in the Mabus code. But there also are other leaders from the West, deeply entangled in Middle Eastern turmoil, a current US president and a charismatic candidate who could be his successor whose names also easily decode out of Mabus, making the search for the right candidate the most provocative and topical challenge presented by Nostradamus for our present times.’

John Hogue isn’t alone in his quest to figure out who Mabus, the third Anti-Christ, may be. There’s even a website www.mabus.biz, which attempts to decode the mystery of the final Anti-Christ Nostradamus warned the world about. They include suggestions such as President Barack Obama, John McCain, Hillary Clinton, George HW Bush, Pope Benedict XVI, Mahmoud Ahmadinejad, Karl Rove and a host of others.

According to the translation of Nostradamus’ Quatrain they include on their website, it reads:

Mabus then will soon die, there will come

Of people and beasts a horrible rout:

Then suddenly one will see vengeance,

Hundred, hand, thirst, hunger when the comet will run

Another website specializing in Nostradamus translations says they don’t agree with the commonly accepted translation of the ‘Mabus’ Quatrain. They insist, to briefly summarize their argument, that Mabus isn’t a proper name. It was only capitalized because it was the first word in the sentence. Therefore, the 3rd Anti-Christ has just as much chance of being named Mabus as being name Joe or Sally.

The site PearlsOfNostradamus.com includes one of the more detailed and meticulous translations of Nostradamus’ writings. Taking all of Nostradamus’ subtleties with punctuation and capitalization into account, they translate the 3rd Anti-Christ Quatrain as follows:

Commander deceit after soon at that time will decease, will arrive,

To inhabitants of a country & animals without reason one hideous overthrow:

Moreover everything in blow there revenge one will note,

Explaining why they believe the first word ‘Mabus’ translates into ‘Commander deceit’ instead of a proper name, the site writes, ‘In order to make this translation, I have read the letters as ‘M abus’, where it is an accepted abbreviation in French to us ‘M’ to mean, ‘Maitre’. We do the same in English with the abbreviation ‘Mr’, which is used commonly to represent the word ‘Mister’. This leaves the letters spelling ‘abus’ to be read as the common French word that means, ‘abuse’.’

So, is Naval Secretary Mabus the Anti-Christ? The site PearlsOfNostradamus.com says no. Other sites say yes, while still others say maybe. But who exactly is Ray Mabus?

According to the US Navy website, ‘Ray Mabus is the 75th United States Secretary of the Navy. As Secretary, he leads America’s Navy and Marine Corps and is responsible for an annual budget in excess of $150 billion and almost 900,000 people.’ This one US official controls an army that is one and a half times the size of China’s entire annual military budget.

The site goes on to detail Ray Mabus’ biography saying, ‘Prior to joining the administration of President Barack Obama, Mabus served in a variety of top posts in government and the private sector. In 1987, Mabus was elected Governor of Mississippi. As the youngest governor of Mississippi in more than 100 years at the time of his election, he stressed education and job creation.’

It continues, ‘He was appointed Ambassador to the Kingdom of Saudi Arabia for the Clinton Administration in 1994. During his tenure as Ambassador, a crisis with Iraq was successfully averted and Saudi Arabia officially abandoned the boycott of United States businesses that trade with Israel.’

Seemingly able to accomplish anything he sets his mind to, the US Navy concludes its biography saying, ‘Secretary Mabus is a native of Ackerman, Mississippi, and received a Bachelor’s Degree from the University of Mississippi, a Master’s Degree from Johns Hopkins University, and a Law Degree from Harvard Law School. He has been awarded the US Department of Defense Distinguished Public Service Award, the US Army’s distinguished Civilian Service Award, the Martin Luther King Social Responsibility Award from the King Center in Atlanta, the National Wildlife Federation Conservation Achievement Award, the King Abdul Aziz Award from the Kingdom of Saudi Arabia, and the Mississippi Association of Educators’ Friend of Education Award.’

So, is US Navy Secretary Mabus the same Mabus Nostradamus called the third Anti-Christ? Only Nostradamus and Ray Mabus know for sure. One thing is for certain however, there are thousands of Nostradamus experts working tirelessly to solve that riddle. And while most people will say the whole idea is crazy, others will concede that it’s fairly strange that a man with the same unique name as Nostradamus’ third Anti-Christ should spend his career rising to the position of controlling the largest military on Earth.